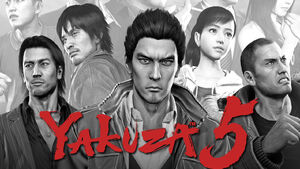 A 2012 videogame. The fifth installment of the Ryu ga Gotoku series.

After the events of Yakuza 4, series protagonist Kazuma Kiryu has left his old life as criminal behind to work as a taxi driver under the alias Taichi Suzuki. However, one day, while doing his work, he ends up meeting Daigo Dojima, the leader of Kiryu's old yakuza organization, the Tojo Clan. Kiryu drives for him despite his reluctance to talk with someone on his old life, yet the conversation ends peacefully and nothing seems to happen because of it.

Tropes used in Yakuza 5 include:
Community content is available under CC-BY-SA unless otherwise noted.
Advertisement