Tropedia
Register
Don't have an account?
Sign In
Advertisement
in: Trope, Stock Phrases, Skills and Training Tropes, You Are Not Ready

You Are Not Ready 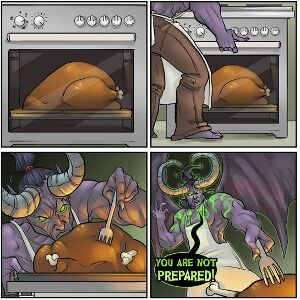 Commonly uttered phrase by powerful — often Sufficiently Advanced — beings when lesser lifeforms (like our heroes) ask for assistance or technical support. Oftentimes, the heroes get a hold of the information or gear for themselves, and the point is proven or refuted.

In other situations, this can be a line uttered by either The Obi-Wan or the Big Bad. In the former case, he is telling our young hero not to be brash and preperation is very important (though the hero will rarely listen). In the latter case, it is used as a rather hammy taunt.

Compare to Figure It Out Yourself, The World Is Not Ready.

Examples of You Are Not Ready include: